You are at:Home»Immigration Issues»Agriculture»Cesar Chavez Dedicated his Life to Fighting for American Workers 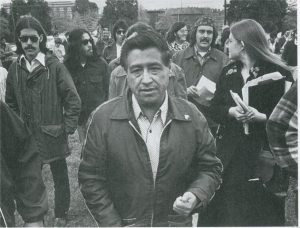 There is a new biopic of Cesar Chavez that was screened at the White House on March 19.  Some of us were wondering if it would honestly deal with Chavez’s vehement opposition to illegal immigration.  Not really. No one for a moment believed that Chavez’s fight to prevent illegal immigration from Mexico would make it onto the screen.  Not now that his legacy has been co-opted by the open-borders crowd. The concealment of Chavez’s unambiguous support for a secure and well-regulated immigration system betrays over a century of struggle by the labor movement to protect American workers from excessive immigration – a struggle that current leaders of national labor unions have abandoned.

As the head of the United Food Workers, Chavez used union workers to set up a “wet line” to prevent illegal aliens from crossing the border to break strikes by UFW farm laborers. Chavez unabashedly insisted that the rights and well-being of American workers, no matter their ethnic or racial background, were his first priority, and much of what he said directly contradicts those who pretend who speak in his name. Specifically, he wanted nothing to do with ethnic pandering:

…when you say ‘la raza,’ you are saying an anti-gringo thing, and it won’t stop there. Today it’s anti-gringo, tomorrow it will be anti-Negro, and the day after it will be anti-Filipino, anti-Puerto Rican. And then it will be anti-poor-Mexican, and anti-darker-skinned Mexican….La raza is a very dangerous concept.

Cesar Chavez did support the 1986 amnesty because, like Ronald Reagan who signed it into law, he believed that it would solve the problem once and for all, because that’s what politicians promised. It is impossible to know what Chavez would say now about our porous borders and the plight of working-class Americans. But what Chavez did say and what he did do as head of the UFW is not, as Ruben Navarrette Jr points out, a matter of interpretation:

Chavez earned many titles in his life, but “champion of immigrants” was not one of them. He was primarily a labor leader who was concerned about illegal immigrants undercutting union members, either by accepting lower wages or crossing picket lines. He never pretended to be anything else, and he resisted attempts by others to widen his agenda. When he pulled workers out of the field during a strike, the last thing he wanted was to see a crew of illegal immigrant workers take away his leverage.

When Chavez coined the phrase Sí, se puede, you can be assured it wasn’t a pro-amnesty slogan.