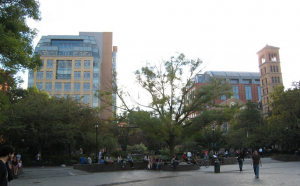 Assembly Bill (A.B.) 9640, also known as the “New York state DREAM Act,” recently passed the New York State Assembly and is now being considered by the Senate’s Higher Education Committee. The bill is a reincarnation of Assembly Bill 2597, an identical bill, which was defeated in the Senate in March of this year by two votes. This legislation, if enacted, would make illegal aliens eligible for taxpayer-funded financial aid at all New York’s public colleges and universities. The bill would also create a separate scholarship fund, called the New York DREAM fund, accessible only to students who have at least one parent who is an immigrant.

According to the state comptroller, the number of illegal aliens who stand to benefit from the DREAM Act is estimated to be about 8,300. As a result, A.B. 9640 would cost New York taxpayers as much as $25 million per year. (See both the Wall Street Journal, May 13, 2014 and Latin Post, Jun. 3, 2014 for more deails.) This would be on top of the money New York taxpayers already spend providing illegal aliens with in-state tuition at New York’s public colleges and universities. (See NY CLS Educ. § 6206) Wow! Enough is enough already! New Yorkers cannot afford this additional giveaway to citizens of foreign countries.

Make no mistake: If passed, this legislation will harm New York’s higher education system, which is already suffering a budget crisis, and, consequently, taxpayers and citizen and legal resident students. Specifically, state fiscal support for higher education has decreased by 14.7 percent, or by a total of nearly $2 billion, between FY 2008 and FY 2013, despite significant increases in enrollment in the State University of New York (SUNY) and City University of New York (CUNY) schools. During this period, New York’s public colleges and universities were forced to increase tuition on average by more than 17.5%,  reduce grants and scholarships,  eliminate staff positions,  close campuses,  eliminate academic programs,  reduce class offerings,  increase class sizes,  postpone necessary renovations,  and make countless other subtractions. As a result of these budget cuts and annual tuition hikes, New York’s graduates possess more education-related debt than ever, carrying an average of $25,537 of debt, with over 60 percent of students relying on loans to fund their education.

A.B. 9640 would only serve to further damage and strain delicate budgets, divert funds from the state’s citizen and legal resident students, reduce the quality of public education in New York, and impose additional burdens on New York taxpayers – who heavily subsidize post-secondary public education – and parents and students – through tuition hikes – to make up the loss. Clearly, this legislation is fiscally irresponsible.