Obama Asks Congress to Fix Crisis of His Own Making;
Demand that Congress Change Policy, Not Just Write a Blank Check!

Facing an out-of-control flow of illegal alien minors across the southern border, President Obama is now asking Congress to fix this crisis — one of his own making.

We need your help to make sure Congress does the right thing!

Since his first day in office, President Obama has blatantly refused to enforce our immigration laws. Under the guise of “prosecutorial discretion” he has ordered immigration agents to essentially ignore all illegal aliens who have not been convicted of violent crimes. Removals of illegal alien minors have dropped nearly 80% during his Administration. Even President Obama’s former director of Immigration and Customs Enforcement (ICE) unapologetically declared that the chances of the average illegal being deported are “close to zero.”

Now, President Obama is asking Congress to pick up the pieces of these disastrous policies. Yesterday, the President sent an official request to Congress to provide $3.7 billion in additional funding to federal agencies dealing with the tens of thousands of illegal alien minors in the U.S. who now need shelter, care, and processing for removal.

However, under the President’s funding request, most of the money ($1.8 billion) will actually go to care for the illegal alien minors as they stay in the U.S. Additional portions will go to adding judges, attorneys (including attorneys to represent the illegal aliens), and detention space. Hundreds of millions of dollars will also be sent to countries in Central America to help them receive their own nationals. 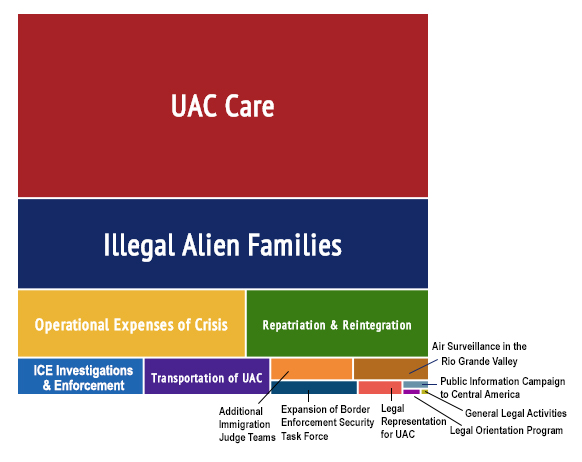 Incredibly, none of the money will be used to add Border Patrol or ICE agents, who are being pulled off the job to process and care for illegal alien minors. And the President is not requesting funding to deploy the National Guard to the border so that Border Patrol and ICE agents can return to their jobs of protecting our country.

Additional funding — if actually used as promised — might help ease the chaos, but it will not solve the crisis. But with immigration courts already facing a backlog of over 360,000 cases, speeding up the process will only go so far.

That’s why we must demand that Congress condition any additional funding on making meaningful policy changes. In short, Congress must:

Call your Senators and Representatives NOW and demand they make these policy changes before funding the President’s request! Tell them if they don’t, they will simply be flushing money down the drain, and the President’s policies will continue to encourage illegal immigration. To find your members of Congress, click here.