You are at:Home»Immigration Issues»Crime»DHS Releases End of Year Numbers; ICE Arrests Up 40 Percent

This morning, the heads of U.S. Immigration and Customs Enforcement (ICE), U.S. Customs and Border Patrol (CBP) and U.S. Citizenship and Immigration Services (USCIS) held a press conference to announce their final statistics for fiscal year 2017. Overall, the statistics show that the Trump administration is keeping his campaign promises to combat illegal immigration and gang activity, as well as drug and human trafficking. There was a dramatic uptick in enforcement after President Trump issued executive orders that set the immigration-related priorities for his administration just over three months into the fiscal year. 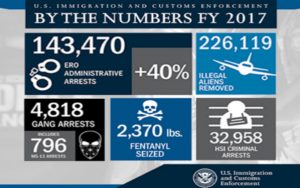 According to acting Director Tom Homan, ICE arrests of immigration violators were up 40 percent to 143,470. Of those, 89 percent had either existing criminal convictions or pending charges. These charges ranged from drug offenses (76,503), to assault (48,454), homicide (1,886) and many other serious crimes. In addition, ICE arrested nearly 800 MS-13 gang members – an 80 percent increase from last year.

Ronald D. Vitello, acting Deputy Commissioner of CBP, announced that the agency apprehended more than 301,000 illegal aliens at or near the border. That is a considerable decrease from last year, presumably due to a reduction in the number attempted illegal crossings into the United States.

Additionally, ICE announced that so-called “Sanctuary Jurisdictions” declined a total of 8,170 detainer requests. ICE was only able to arrest 6 percent of these immigration violators after they were released into the public. The rest remain at large in American communities. Currently, there are 7,710 illegal and criminal aliens at-large who would otherwise have been  turned over to ICE for removal had these jurisdictions cooperated with federal law enforcement agents.

These statistics confirm what was already obvious – that President Trump and his administration are serious about enforcing American immigration laws, with a renewed focus on removing dangerous criminal aliens from the United States. However, as was mentioned by the heads of all three departments, these promising signs will disappear if they are not complemented with real immigration reform, such as mandatory E-Verify for all employers, and progress in securing our borders with additional immigration enforcement officers and an effective, physical barrier.