You are at:Home»Federal»Conservative Groups Push Amnesty While Proclaiming Financial Doom 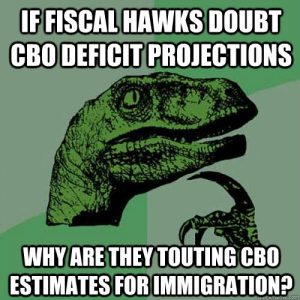 With the recent news from the Congressional Budget Office that deficit projections for 2013 will be lower than expected, three right-of-center policy groups rushed to remind taxpayers that America’s fiscal situation is unsustainable while trumpeting the Gang of Eight’s amnesty plan despite estimates that amnesty will cost trillions.

Serving as the main ambassador for amnesty to conservatives, Doug Holtz-Eakin from the American Action Network warned:

The big news is that CBO revised the current-year deficit projection down from $845 billion to $642 billion — a shift that stemmed from two special, one-time, non-repeating, 2013-only (get the point?) factors: (1) a revision up of $105 billion in estimated tax collections and a $95 billion combined dividend payment from Fannie Mae and Freddie Mac.  For the entire 2014-2023 period, CBO changed its revenue projections by only $95 billion, so the good news is isolated to 2013.

Indeed, the 10-year deficit remains at $6.3 trillion, down ever so slightly from the $6.9 trillion projected in February.

That $6.3 trillion figure should sound familiar. Ironically, the figure that the pro-amnesty Holtz-Eakin uses is same as the estimated cost of amnesty over the next fifty years according to the Daily Signal. A figure, the American Action Forum and their other pro-amnesty organizations – the Hispanic Leadership Network and the American Action Network – have repeatedly attacked because the Heritage study did not use a questionable type of methodology that makes the numbers look better for amnesty proponents.

This analysis from JPMorgan is sums things up nicely:

The latest CBO projections look for the federal budget deficit to hit bottom at 2.1% of GDP in FY 2015 and then gradually rise to 3.5% of GDP in 2023, the end point for the 2014-2023 10-year forecast. This convenient end point makes current policies appear to be sustainable, or at least sustainable with only gradual adjustments and fixes over the next decade.

Around 2023 demographics trends turn brutal. The latest (June 2012) CBO long-term projections show that under the more realistic “extended alternative fiscal scenario,” the federal budget deficit rises by more than 10% of GDP from 2022 to 2037. This reflects in large part the aging of the population and the movement of baby boomers into years of more intense medical needs. Increasing primary deficits also bring, over time, significant increases in interest payments as a share of GDP.

Around the same time as JPMorgan’s “brutal” projections, FAIR estimates that the U.S. would have admitted nearly 34 million immigrants under the Gang of Eight bill, which is likely to accompany a surge of amnestied aliens receiving some kind of entitlement program.

While the Gang of Eight swear that their bill would be an economic boon, U.S. Census data shows that immigrants are far more likely to fall below the poverty line & use social programs than non-immigrants.

Most of the arguments that adoption of the amnesty would be an economic benefit – like Sen. Rubio’s – are based on the assumption that newly legalized workers will get better jobs and move out of poverty. The experience with the beneficiaries of the 1986 amnesty proves that assumption is naïve – at best – or deliberately misleading welfare.

Since the majority of illegal aliens have less than a high school education, they would face limited opportunities to find legal employment. Currently, about half of recent college graduates are working jobs that don’t require a degree, and many are working for minimum wage. The idea that “immigrants will do the work that American’s won’t” is not true.

As much as Senator Rubio would like to claim all aliens would improve their economic standing because his own family did, lessons from the 1986 amnesty differ. A survey conducted of those receiving amnesty in 1986, found that after five years, the majority did not see any improvement and some saw a decrease in their standard of living. As that “brutal” future hurtles towards us, remember that amnestied aliens stuck in low-paying jobs will receive far more in Social Security benefits than they ever contributed.

As one of the main partners who helped draft the legislation, the U.S. Chamber of Commerce continues to champion the bill and their part in negotiating a “guest” worker program with labor unions.

Sean Hackbarth of FreeEnterprise.com, a project from the U.S. Chamber, writes that the CBO makes optimistic projections:

…CBO’s 10-year projection doesn’t assume any recessions. That would mean that the U.S. economy wouldn’t experience a recession over a 14-year period. There hasn’t been such a long period of uninterrupted growth in the post-World War II era. Falling revenues and increased counter-cyclical spending caused by a recession would exacerbate our fiscal situation.

While the news of a smaller-than-expected deficit is welcome, it doesn’t mean we can avoid reforming entitlement programs. A harsh fiscal crisis is still impending if we don’t.

Hackbarth notes that these projections only work under the best circumstances possible. Even if we saw an unrealistic period of growth — which remains unlikely given that only 63.3% of working-age adults in the labor force are unemployed — the country still faces a deficit of $6.3 trillion before the added expense of the Gang of Eight amnesty.