Concerned that S.744 repeats many of the same mistakes as the 1986 amnesty bill in addition to breaking numerous promises to the American people, Senators Ted Cruz, (R-TX), Chuck Grassley (R-IA), Jeff Sessions (R-AL) and Mike Lee (R-UT) sent a “Dear Colleague” letter to their fellow members of the U.S. Senate outlining their opposition to the bill:

Americans expect their government to end the lawlessness, not surrender to it. They deserve immigration reform with actual border security, enforcement of the laws on the books, and a legal immigration system that works. We must welcome and celebrate legal immigrants, but S. 744 fails to deliver anything more than the same empty promises Washington has been making for 30 years.

Noting numerous failures to strengthen the bill during the Senate Judiciary Committee markup, the letter highlights nine major problems with the Gang of Eight bill: 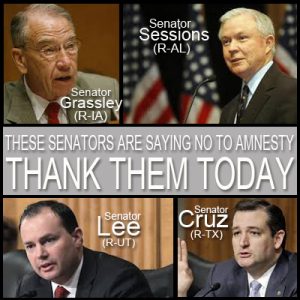 Read the letter below or visit NoAmnesty.org to see a PDF.