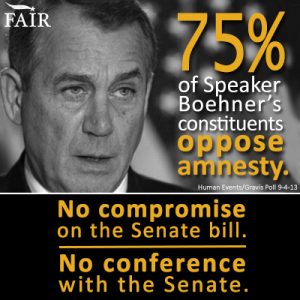 Representative Stockman is concerned that under House of Representatives rules, if the House goes to conference with the Senate amnesty bill without having first taken a position on a specific issue, they will be forced to accept the Senate bill’s broad pro-amnesty and open borders provisions. “House Republicans must avoid any actions which could undermine the House’s intention on passing narrowly-focused immigration-related bills,” Stockman’s letter reads.

Indeed, as Rep. Stockman’s letter points out, Senate amnesty proponents would love nothing more than to trap the House into a conference. “If we go to conference, we would win,” proclaimed Senate Majority Leader Harry Reid. Gang of Eight Leader Sen. Chuck Schumer, who took part in the 1986 amnesty’s conference committee, has echoed this sentiment. “[T]he end game strategy is to get a conference with the Senate (comprehensive) bill by having the House pass a group of bills.”