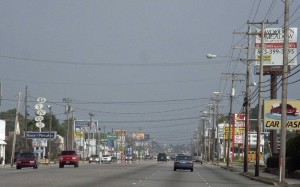 Two different articles for immigrationreform.com readers starting off the week: Both relate to the idea of economic growth, and also to the myths used by amnesty supporters.

The first article is by Erik Lindberg at resilience.org. It’s about the expansion of the U.S., and how that expansion was driven in part by the perceived infinite space/resources of the new American continent.

One doesn’t have to agree with all of Mr. Lindberg’s views to see where the tension between the ideal of the Jeffersonian yeoman farmer and the slash and burn agricultural plantation was resolved in favor of Big Ag. Today we have mega farms, heavily dependent on huge subsidized energy inputs (and foreign labor).

“We have, I will argue, designed all our life supporting systems—our food, our trade, our manufacturing, our waste disposal, even our political elections—as if the world were limitless, our resources and dumps infinite.”

This notion of America-the-infinite shows up in the defense of mass immigration time and again (e.g. the notion that the entire population of the world could live comfortably in Texas).

The second article is by Chuck Marohn of StrongTowns.org. Marohn has written before about the Ponzi economics behind our current suburban development pattern and how this hollows out our cities, making them less resilient and more fragile, and removes wealth from a community.

As he notes, Pope Francis recently issued a letter on Capitalism taking modern economics to task. But, changing from where we are today is likely to be painful, argues Marohn.

The reality is that Wal-Mart – and businesses like it — need to go out of business, not because government drives it out of business, but because they have a bad business model that would naturally fail if it wasn’t being propped up. Companies like this rely on artificially low energy prices, artificially low transportation prices, artificially low cost of money for large players, regulations that disproportionately impact small competitors, a tax system that disproportionately impacts small businesses, and on and on and on.

This is where the economic argument for more immigration is tied into maintaining the economy as it is. It boils down to the amnesty lobby saying “Look how much you benefit from cheap labor, so you have no standing to object, and objecting is against your own interest since you benefit as well.” And, how many arguments about immigration start with the phrase “jobs Americans won’t do?”

Mass immigration supporters rely on people’s willingness to be complicit with more immigration — they want the public to believe that there is no alternative and that they benefit from it too, and so every summer the Big Ag lobby starts talking about crops rotting in the field (despite 40 percent of food being wasted) and every spring the home-builder lobby talks about a lack of workers (despite millions of vacant homes).

population growth population increase
Previous ArticleWill House Republicans Follow the Money or Their Consciences on Immigration in 2014?
Next Article Immigration and Immigrants: The Forest and the Trees