You are at:Home»Federal»Congress»Thanks for Pandering, Guys 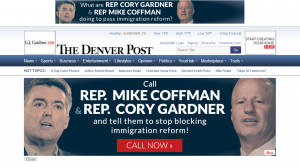 The illegal alien lobby’s pitch to Republicans has been: Support mass amnesty and fall into our warm embrace. Amnesty is the only thing standing between you and millions of voters.

Amazingly, quite a few Republicans have been willing to drink the Kool-Aid. Among them are two Colorado Republican House members, Representatives Mike Coffman and Cory Gardner (who is seeking a seat in the Senate). Both have come out in favor of amnesty as a cornerstone component of “comprehensive immigration reform.”

But supporting mass amnesty is apparently not enough. Coffman and Gardner refuse to subvert the Constitution and support the Obama administration’s moves to implement amnesties that were never enacted, or unilateral decisions to suspend deportation mandated by existing statutes. As their reward, the George Soros-supported group, America’s Voice, purchased all of the ad space on Friday on the Denver Post’s homepage attacking Coffman and Gardner.

As if that weren’t thanks enough for their efforts, another Soros-backed group, We Belong Together, Gardner and Nevada Republican Mark Amodei, another amnesty supporter, had their offices taken over by protestors.

Amnesty
Previous ArticleChild Trafficking?
Next Article Crisis on the Border: Is There an End Game?