You are at:Home»Immigration Issues»Asylum & Refugees»Detain or Release? Monitor or Not? 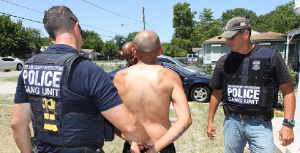 In connection with the Obama administration’s dismantling of the nation’s immigration law enforcement efforts, it is currently loosening the regulations for detention of apprehended illegal aliens. Aliens apprehended by the Border Patrol are routinely held for a short period while they are interviewed and their identity is established. Mexican illegal aliens are then returned to Mexico although they may first appear before a judge and be given an opportunity to ask for asylum.

Other than Mexicans (OTMs) are not sent home so quickly because travel by air is more complex and permission of the home country is required. That means they will be subject to detention at other facilities. Over time this has become a contentious issue because the illegal alien support groups demanded, inter alia, special facilities for detaining minors. That resulted in a problem with the surge of unaccompanied minors last year, and the government has opened two additional facilities as a result.

Congress made clear in 1996 (the Illegal Immigration Reform and Immigrant Responsibility Act) that all illegal aliens should be indefinitely detained until they are either found eligible for residence as asylees or are deported. This mandate was in response to a large surge of illegal aliens arriving by air and requesting asylum. At that time, they were being given work permits and released with an order to appear in court for a hearing on their claim far in the future. They were disappearing into the woodwork rather than appearing for the hearing. And, the detention mandate had the desired effect of stopping the surge of asylum claimants in its tracks.

That mandate was weakened by a federal court decision in 2001 (Zadvydas v. Davis) that held that the aliens could not be held indefinitely. That ruling meant that those whose cases were not heard by a judge within six months, and those whose countries refused to approve their return, had to be released. The court ruling was not absolute. It exempted from the mandatory release those aliens who are a threat to society. Current cases demonstrate, however, that even those who are a threat to society are also being released.

Nevertheless, the illegal alien advocacy groups have continued to push for speedier release of the detainees. Still early after the 1996 law was passed, the immigration authorities began to allow the release of aliens who had a family member or an organization that vouched that they would assure the alien’s appearance at the asylum hearing.

But, there continues to be a large share of released illegal aliens who fail to appear for the hearing on whether they will be deported or allowed to stay. To try to deal with this continuing problem, the authorities have begun requiring ankle monitors for those released. This is a fairly new development and its success is not yet established.

The illegal alien support groups are now attacking the ankle bracelets and, according to an August 2 Los Angeles Times account (“Immigrants object to growing use of ankle monitors after detention”), are demanding that the authorities stop using them. An activist argued that, “Electronic monitoring devices are best used for high-risk folks with criminal histories.” Others argued that, “that the government should shift from punishing to aiding asylum seekers.”

The newspaper would appear to support this logic since the article offered no contrary opinion or analysis. Yet, it is unimaginable that “high-risk folk with criminal histories” should be released under any circumstances. And, as a large majority of asylum claims result in a non-appearance or are found ineligible, it is absurd to treat illegal aliens claiming asylum as if they are entitled to that status.