Democrats have outlined three defining challenges of our time: Income Inequality, Climate Change, and Civil Rights.  If they were truly interested in addressing these three issues, they need to rethink their position on immigration. Immigration alone has an order of magnitude greater impact on these issues than any current or proposed government program or policy. Democrats need to have an honest discussion on immigration, analyze the facts and data, and adopt policies that lift up all Americans.

In the second of three blogs, I will address the nexus between immigration and climate change.

While Climate Change is hyper-politicized, I think we can all agree that burning tons of fossil fuels is not good for the environment.  President Obama recently launched the latest round of Climate Change plans and actions to use the EPA and others to restrict coal plants, invest in renewable energy, and push for more fuel-efficient vehicles.  Combating climate change is all about reducing carbon dioxide emissions.

The U.S. has one of the largest CO2 emissions per capita, from heating and powering our homes and businesses, personal and commercial driving, and consumption of food, goods, and services. A majority of immigrants to the U.S. come from nations with a fraction of per capita CO2 emissions.  The U.S. emits five times the amount of CO2 per person as Mexico and over 8000% more per person than Haiti.  To put that in context 536,000 Haitians would emit 115,000 tons of CO2, whereas the same number of people in the U.S. would emit nearly 9.5 million tons.  The table below shows the CO2 emissions per capita of the top 10 countries of origin for U.S. immigrants and the percentage increase. 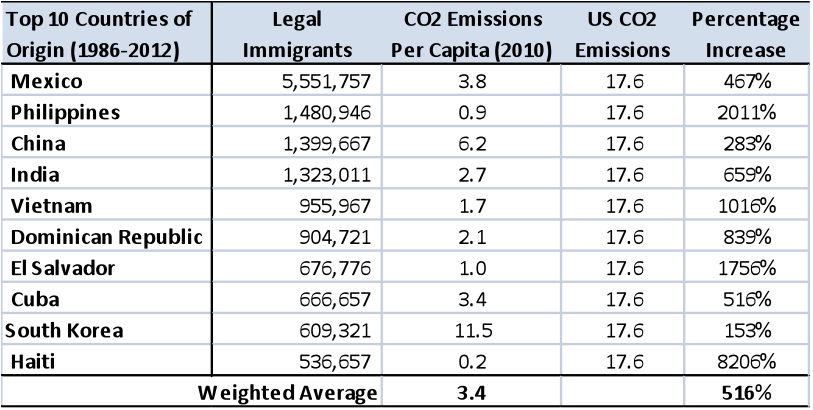 In 1970, the U.S. population was just over 200 million.  Today it is 321 million.  By 2050 the U.S. is projected to exceed 436 million. Immigrants and their descendants drive most of the growth.  To combat climate change, Democrats have proposed a wide-array of solutions to reduce carbon emissions by 10-30% over the next 20-30 years. The proposed solutions come at potentially considerable economic and social cost to achieve their goals.  Yet over the last 38 years, the U.S. population grew by over 100 million people and will do it again in the next 35 years.

Even if Democrats were successful in implementing the most aggressive climate change solutions, 100 million more people increasing their CO2 emissions by over 500% would dwarf any progress made. If the U.S. reduced the number of immigrants each year, the data clearly shows the Earth would be healthier.

The author of this guest opinion is a federal policy analyst.

climate change Democrats
Previous ArticleEnding Anchor Babies by Executive Action
Next Article It’s Not Your Imagination, Your Paycheck Actually is Getting Smaller