The Obama administration claimed it had solved the unaccompanied minor crisis that surged in 2014 by falsely proclaiming that the illegal entrants would be sent back home and setting up a program to allow the legal arrival of minors from Central Americans who had parents illegally residing in the United States. This waiver program is like the DACA amnesty for persons brought illegally to the United States as youth – except this expansion includes those minors still living in Central America.

But a new surge of unaccompanied minors and families with children has again emerged. According to December 9 Washington Times report, “Emergency measures imposed as border surge surprises, overwhelms immigration officials,” apprehension of minors in October and November was more than double the level a year earlier. And, it was 73 percent higher for families. The WT says, “Two months into the new fiscal year, the number of unaccompanied minors jumping the border and getting caught is at an all-time high. 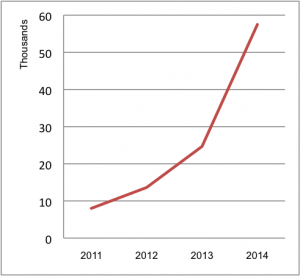 Statements by the arriving illegal aliens asserting that they came – and often turned themselves in to the Border Patrol – to get “permisos” (permits) to stay in the U.S. make clear that the administration’s policy of reuniting these new illegal aliens with their family members residing illegally in the U.S. has been a powerful “pull” factor that provoked this surge. It is obvious from the new data that the false statements by the administration about speedy deportation of the new illegal arrivals is seen by them as posturing rather than any real commitment to deal with the problem.