You are at:Home»Federal»Congress»Speaker Paul Ryan Claims He Opposes Amnesty 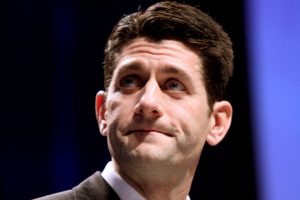 No, this is not a headline from the faux news outlet The Onion. Appearing on CNN’s “The Lead,” House Speaker Paul Ryan (R-Wis.) dismissed the charge from GOP presidential hopeful Donald Trump that Ryan is weak on immigration. “People who know my record know that I’m for border enforcement, border control, not for amnesty,” the Speaker insisted. If you watch the video of the exchange with host Jake Tapper you will see that Ryan has a straight face while making the immigration claim.

Yet, a review of Ryan’s Capitol Hill career, including time as a staffer, shows how preposterous the Speaker’s assessment of his immigration position is. As the Washington Times’ Stephen Dinan noted in 2012 when Ryan was Mitt Romney’s running mate:

As a staffer in Washington, he worked for Jack Kemp and Sen. Sam Brownback – both of whom were part of the Republicans’ pro-immigration wing, and who fought crackdown efforts from within their own party… As a congressman, he voted for a 2002 legalization bill, praised the 2006 Senate [amnesty]bill back by Mr. Bush and co-sponsored a 2009 Democratic bill that would have legalized [illegal]immigrant farmworkers.

Ryan’s more recent legislative history is even worse on immigration. Indeed, during the 2013 Senate Gang of Eight “comprehensive” immigration reform push, Ryan was the main promoter in the House. Facing heavy criticism for that role from conservatives and the American people, Mark Zuckerberg’s pro-amnesty FWD.us launched a $350,000 ad campaign defending Ryan. The ad opened, “Amnesty? Not a chance,” while claiming that Ryan was looking for a “conservative solution” to immigration reform.

FAIR countered with its own ad campaign criticizing Ryan for catering to illegal aliens at the expense of his constituents.

Paul Ryan has a multi-decades long history of consistently supporting amnesty. By his comments on CNN, he must think the American people are naïve on the issue.