You are at:Home»Federal»Clinton Got Her Foot Caught in the Amnesty Trap – Here’s Why 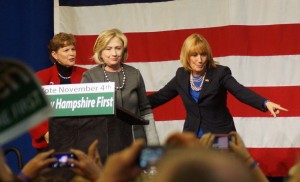 Donald Trump rode to victory because the Democrats left him two huge openings on trade and immigration. Hillary Clinton’s positions on amnesty created vulnerability for her. Pushed to the far left, Clinton took positions that were untenable – rewarding illegal behavior in front of the law abiding while never committing to a credible strategy that would defend America’s borders going forward. Trump took full advantage, driving home the point that the Democratic nominee never pledged to even try to halt future illegal immigration.

Charitably, you might claim she was held captive by a wing of her party that had been encouraged to demand ever more. Clinton was trapped in the corner Obama had painted her into.  The reality is that she and folks like the retiring Minority Leader Harry Reid had been lulled into using the amnesty issue to beat down a cowed and malleable Republican Party leadership – so weak had been the congressional response to executive overreach.  They went too far and Trump called their bluff.

Somewhere along the way, immigration became a political operation of the Democrats. Gone was any concern about the welfare of the American worker or the primacy of the rule of law, and Donald Trump used that, along with trade, to take portions of the “blue wall” in the rust belt.  Lesson learned:  don’t forget your base in an unprincipled effort to exploit an issue that should be above partisan manipulation.  Here the people rule!