You are at:Home»Immigration Blog Posts»The Heart of #GivingTuesday 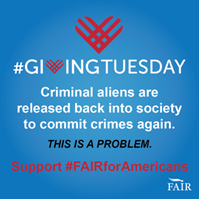 I have been fundraising for more than thirty years and am often asked, “Why do people contribute their hard earned dollars to charity?” The one reason that I have seen over and over again is when it comes to charitable giving, we are most often ruled by our passion for a cause – meaning we give from the heart.

For more than 35 years the Federation for American Immigration Reform (FAIR) has been at the heart of educating Americans about the need for immigration reform that puts Americans first. While uncontrolled immigration takes its toll on national security, jobs, education, health care, and our environment, the one area that many people often overlook is the lives criminal aliens have stolen from American families – like Sarah Root.

Sarah was killed on January 31, 2016 by Eswin Mejia, an illegal alien from Honduras who was street racing in Omaha, Nebraska, when he rear-ended her SUV. Sarah had just graduated from college with a 4.0 GPA the day before her life tragically ended. Mejia was arrested and charged with motor vehicular homicide but posted bond to get out of jail and was released. He is still on the run. Omaha is within Douglas County, which has sanctuary policies that impede local law enforcement’s ability to cooperate with Immigration Customs Enforcement (ICE) officers. If our immigration laws worked like they were supposed to, Mejia would have been in jail or deported for crimes he committed before the accident even happened.

Your gift on this giving Tuesday to #FAIRforAmericans will help FAIR continue the fight for immigration reform that puts Americans, like Sarah Root, first.

Bob joined the Federation for American Immigration Reform (FAIR) in 2016 as the Development Director. He oversees the fundraising and donor relations efforts for FAIR. Bob has over 25 years of experience in the field of development that has included working for national, international and local non-profit organizations. He has worked for private Christian schools, institutions of higher education and national non-profit organizations that support our U. S. military veterans. Bob joined the FAIR staff after starting and running a successful fundraising consulting business. Bob and his family reside in northern Virginia.