Given how the immigration system is currently broken, it would be “exceptional” to believe that an adjustable immigration quota would ever be adjusted down. All of the entrenched interests that benefit from mass immigration only want more. In reality, we already have an “exceptional” immigration policy – people here illegally get many exceptions and second chances as shown by the latest news of Obama’s Uncle. 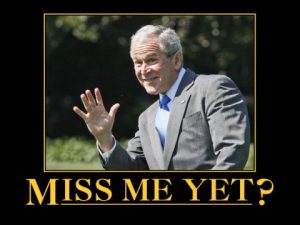 “On Tuesday morning, the Bush Center held a conference on immigration and economic growth at the Federal Reserve Bank of Dallas. It was only the second major policy speech the former president has delivered since leaving office, and Bush let himself wax poetic on the subject of immigration: ‘Not only do immigrants help build our economy, they invigorate our soul.’”

“As we have so many times in the past, our nation is going through a transformational phase. I find that to be a healthy and needed experience. We are renewing ourselves, as only America can. That concept is fundamental to the reality that is American Exceptionalism,” says Robert Gittelson in The Hill.

“If approved by the Democratic-controlled Legislature, Illinois would be the most populous state to offer drivers’ licenses to illegal immigrants. Washington and New Mexico are the only states that allow illegal immigrants to obtain licenses. In Utah, they can get driving permits.”

Obama Uncle Gets Another Deportation Reprieve

“President Barack Obama’s uncle is getting a new deportation hearing after an appeals board ordered the agency running the U.S. immigration court system to review his case,” the AP reports.

“Onyango Obama, the half brother of the president’s late father, is from Kenya but has lived in the United States for decades. He was ordered by an immigration judge to leave the U.S. in 1992, when he failed to renew an application to remain. He later sought to reverse the deportation order.”

California, Chicago Resist Detainer Orders That Are the Key to Enforcement

In other detainer news, “A federal judge in Chicago ruled Tuesday that a lawsuit filed by the Heartland Alliance’s National Immigrant Justice Center against the government’s use of immigration detainers may proceed.

“Farmers are as close to seeing meaningful immigration reform as they’ve been in the past decade, said Jon Wyss, who handles labor issues for Gebbers Farms, a large grower in north-central Washington that fired hundreds of workers after it was subject to a federal immigration audit three years ago,” the Oregonian reports.

“Wyss said national farm groups have joined together to propose a new reform package that would reduce the requirements for growers to recruit workers before turning to a guest-worker program, and would move that program from the purview of the Labor Department to the more farm-friendly Agriculture Department.”

immigration policy
Previous ArticleBush is Back Endorsing Amnesty
Next Article Illinois Driver’s Licenses for Illegal Aliens Puts All of U.S. at Risk