You are at:Home»Politics»Opposition to Gang of Eight Bill Grows Among Immigration Enforcement 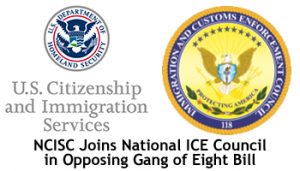 Kenneth Palinkas, NCISC president, echoed the concerns of Chris Crane, president of the National ICE Council, in a statement announcing the position:

Yet, like the ICE Council, the USCIS Council was not consulted in the crafting ofthe Gang of Eight’s legislation. Instead, the legislation was written with special interests- producing a bill that makes the current system worse, not better. S. 744 will damage public safety and national security and should be opposed by lawmakers.

Palinkas also indicated that NCISC would support a letter signed by more than 40 law enforcement and immigration enforcement officials that was released earlier in May.

Since many of the 20,000 employees represented between these two unions are on the front line of immigration enforcement, this announcement made headlines:

A letter to Congress that excoriates the Senate proposal, and that the immigration officers’ union signed for the first time, reveals simmering unrest among Homeland Security employees, who have been asked to carry out broad and fast-paced immigration policy shifts by the Obama administration. Deportation agents have been instructed to focus heavily on removing serious criminal offenders, while immigration officers have been urged to accelerate their decisions on granting legal papers and reprieves from deportation.

In a statement, National Citizenship and Immigration Services Council (NCISC) President Kenneth Palinkas said the bill would create an “insurmountable bureaucracy” within his agency and argued the legislation would interfere with the independent judgment of officers who were already “pressured to rubber stamp applications instead of conducting diligent case review and investigation.”

The opposition of the National CIS Council is a boost to the bill’s opponents in the Senate, and to National ICE Council President Chris Crane, who has become a loud and prominent voice against the legislation, but had found himself alone among federal law enforcement unions in opposition. Palinkas said he would sign a letter Crane sent to senators earlier this month declaring the Gang of Eight legislation “fails to meet the needs of the law enforcement community.”

‘In his statement, Palinkas highlights nine issues his union believes the Gang of Eight legislation fails to address with the current immigration system, including the fact that Palinkas says USCIS has become an application “approval machine” where few applications are denied due to a “rubber stamp” culture, “discouraging proper investigation into red flags and discouraging the denial of any applications…” Palinkas further decries what he calls Homeland Security Secretary Janet Napolitano’s “secretive panels,” which must approve USCIS officers’ notices for illegal immigrants to appear before federal judges to be put in removal proceedings…”

‘Sources say it is highly unusual for the USCIS Council to weigh in publicly on legislation… The USCIS Council, whose members would play a key role in implementing the proposed immigration law, will be the second of three government immigration services unions to oppose the so-called Gang of Eight’s immigration bill… “The legislation will provide legal status to millions of visa overstays while failing to provide for necessary in-person interviews,” said Palinkas “We need immigration reform that works. This legislation, sadly, will not…”

For instance, the legislation fails to tackle the agency’s “insurmountable bureaucracy,” where officers are pressured to approve all applications, Kenneth Palinkas said in a statement Monday explaining why he joined Mr. Crane’s letter. Mr. Palinkas’s union, the National Citizenship and Immigration Services Council, represents about 12,000 USCIS workers.

The National CIS Council is the second union to oppose the bill being discussed in Congress. The National ICE Council, which represents Immigration and Customs Enforcement officers, has expressed its opposition to the bill for a while now.

A key theme throughout the USCIS statement is a lack of trust in the Obama administration to enforce existing law, and the assertion that Schumer-Rubio does nothing to ensure future enforcement.