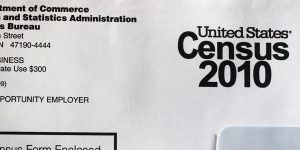 The WSJ on January 23 provided this news story: “Fewer Immigrants Came to U.S. Last Year.”  To document that conclusion it provided newly released Census Bureau (CB) data that put the net increase in the U.S. population resulting from “net international migration” from mid-2012 to mid-2013 at “Just over 843,000.” That estimate was lower than the similar estimate of “…866,000 who came the prior year.” The WSJ’s assertion is not substantiated because the CB number does not include data on the arrivals (immigrants) or departures (emigrants). The reduction in net immigration may simply reflect an increase in U.S. residents departing to live abroad.

The CB data also are very different from the data of the Department of Homeland Security. The DHS 2012 data show that every year since 2005 the number of new immigrants has been more than one million.

The question then becomes, which number is more important? Both numbers show that immigration is a major component of U.S. population growth. The CB number puts the net international migration share of population increase at 37.4 percent of the overall increase of about 2.56 million persons – the rest made up of more births than deaths. The DHS number reflects the number of foreigners who gain permanent residence and become eligible to move around the country and take most U.S. jobs without restriction.

If the focus is on the competition for limited national resources – such as fresh water supplies in California – the CB estimate is the one to focus on. The new CB number for California is a net increase from immigration of 123,217 residents in the past year. If the focus is on the competition for jobs, the DHS numbers are more important. In California, for example, where the unemployment rate was 8.5 percent in November, the annual average number of immigrants admitted for residence there on average since 2005 has been nearly 226,000 persons.

But in addition to the newly admitted immigrants, the number of temporary nonimmigrant workers being admitted is also a key statistic, and one ignored in the WSJ article. DHS nonimmigrant admission data just for California for 2012 put the number of new temporary workers (H,L, and O visas) – excluding accompanying family members – at 187,549. Some of those workers may enter the country more than once during the year.