After a natural disaster hits, the best way to view the devastation is usually from the air. Likewise, it’s helpful now and then to evaluate the broad impact that the Obama Administration has caused to our immigration system by their relentless agenda to gut enforcement and dismantle the rule of law.

The deterioration is rapid and the volume staggering, not only at the federal level but at the state and local level, brought about by politicians mirroring the Obama administration’s top-down example.  The summary below is just a small sample of the massive transformations underway…changes that FAIR and others warned about when the President took office but which at that time seemed so draconian, they defied belief.

Deportations are plummeting to their lowest level since the Ford Administration.  Those who advocate for amnesty have choreographed an absurd myth that President Obama is responsible for inhumane, excessive levels of deportations. Facts say otherwise.  In 2007, the final year of the Bush Administration, deportations were 1,171,058.  Last year there were 358,604 deportations. 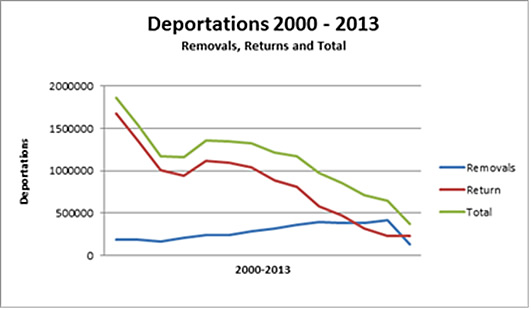 Obama has abused executive power using prosecutorial discretion, deferred action, parole-in-place, internal memos and other administrative mechanisms to create a hands-off policy for broad categories of illegal aliens to such an extent that one single shocking truth is apparent; unless an illegal alien has been convicted of a violent felony or represents a national security threat, the odds of being deported are virtually zero. Fueled by the mainstream media, a new narrative is taking hold; simply violating immigration laws is now entirely inconsequential.

And although the Obama administration claims that criminal aliens are a priority for removal, even they are being released at the rate of 100 per day! 36,000 criminal immigrants were released in 2013, including individuals convicted of murder, rape, kidnapping, and drunk driving.  This release accounted for nearly 88,000 convictions, including 193 homicide convictions, 426 sexual assault convictions, 303 kidnapping convictions, 9,187 dangerous drug convictions, and 16,070 drunk or drugged driving convictions.

Both Democrats and Republicans (the latter financed by the U.S. Chamber of Commerce) continue to push federal legislation that would grant illegals citizenship if they enlist in the military (ENLIST ACT), citizenship for illegal aliens who attend school (DREAM ACT), massive increases in foreign guest workers, and amnesty for 12 million illegal aliens.  Despite having little public support for any of these initiatives, lawmakers are not taking no for an answer.

States wanting to participate meaningfully in enforcement have been all but shut down by DOJ intimidation tactics and federal programs such as 287(g) and Secure Communities are being weakened or gutted entirely.

Sanctuary policies across the U.S. have surged since Obama took office. Resolutions, ordinances, executive actions and other initiatives now exist in 103 cities, towns and counties across 33 states and the District of Columbia.

State and local legislation – most of designed to expand benefits and shield illegal aliens from federal authorities – has skyrocketed.  In 2013, lawmakers in 45 states and the District of Columbia enacted 184 laws and 253 resolutions related to immigration, for a total of 437. This is a 64 percent increase from the 267 laws and resolutions enacted in 2012.

Illegal aliens are now allowed to practice law in Florida and California.

Anti-detainer laws are solidly in place in Connecticut and California that prohibit state law enforcement from cooperating with ICE officials…and the ACLU is filing a lawsuit in California that would prevent police from holding even criminal aliens.  In response, the California Sheriff’s Association has advised all their members to comply with the ACLU’s intent.

In-state tuition for illegal aliens is available now in 15 states.

Driver’s licenses for illegal aliens are now available in 12 states.

Finally, California is considering legislation that allows illegal aliens to apply for professional licenses in a variety of professions including psychologists, pharmacists, real estate and security guards.  It has already passed the state senate…..32 to 0.

The list could go on and on of course, but unlike Obama’s pen with never-ending ink to sign executive orders, ours is running low.

The perspective is discouraging, but like first-responders we have a job to do. Unlike natural disasters, this one is man-made and not inevitable.  Our pledge at FAIR is to fix it by continuing to insist that the framework of laws constituting our nation’s immigration apparatus be reconstructed.  And we will persist in bringing about sensible reforms that have our broad national interests at heart, not least of which is the preservation of jobs for American workers.

Without the support of the American public, we would find ourselves in a worse position.  With your continued support, we will improve our position and we won’t quit until we do.