You are at:Home»Immigration Issues»Education»‘ILLEGAL ALIEN:’ Tell it like it is 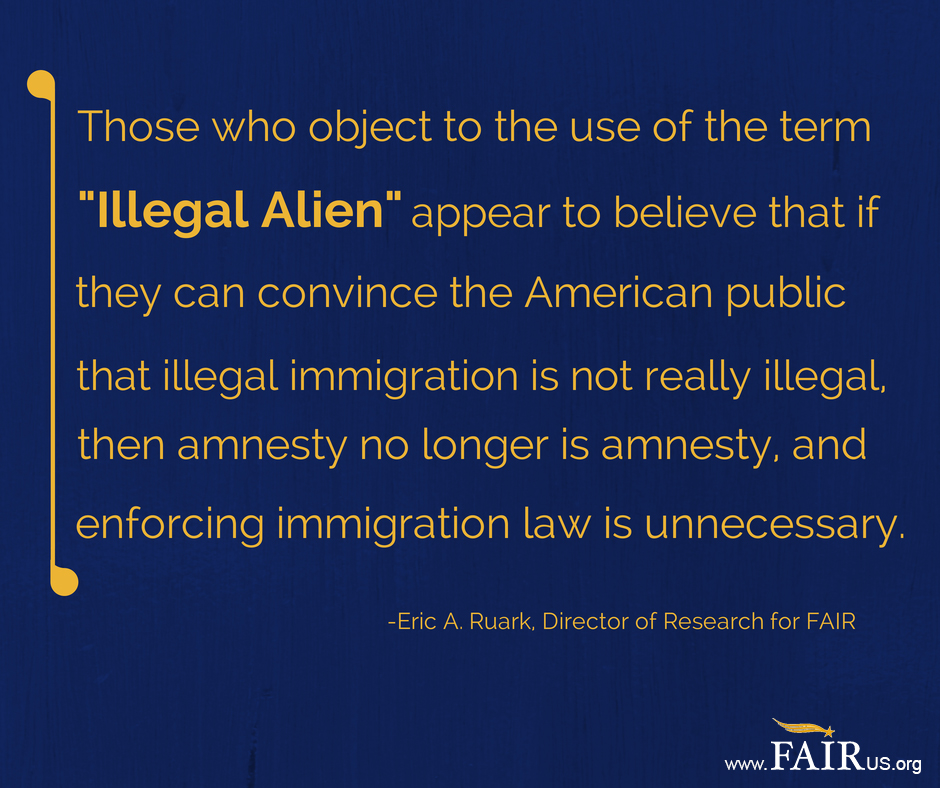 Under federal law, any non-U.S. citizen is an alien. Aliens who have entered the United States without permission, or who have violated the terms of their admission, are identified under the law as illegal aliens. That is a fact, not an issue for debate.

It is also a fact that, according to U.S. law, it is a crime to enter the United States without permission. This first time offense is a misdemeanor, the second time, a felony.

Despite the clarity in the U.S. code on proper terminology, what is known in legal parlance as the “term of art,” a political movement has arisen whose object is to substitute euphemism for precision. A variety of motivations underlie this effort, but regardless of intent, the goal is the same. Those who object to the use of the term “illegal alien” appear to believe that if they can convince the American public that illegal immigration is not really illegal, then amnesty no longer is amnesty, and enforcing immigration law is unnecessary.

There are a few principal arguments made against the use of illegal alien.  They are simplistic, and easily refutable.  The first is that no human being is illegal. To identify someone as an illegal alien does not banish that person from the human race; it simply identifies an individual who does not have the legal right to reside in the United States.

Another oft-employed argument is to claim that illegal aliens just lack the proper “papers,” and so they are not really illegal but instead “undocumented.” The implication is that those with documents were lucky enough to have somehow come into possession of a visa or a “green card,” and not that an alien who received these documents submitted to a complex process that complies with the requirements of entry into the United States. The “undocumented” term is also patently misleading because illegal aliens as a group are certainly not lacking identification documents, only legitimate, legally obtained ones. Often an illegal alien will purchase or manufacture false or stolen documents and, according to Ronald Mortensen of the Center for Immigration Studies, as many as 75% of illegal aliens in the workforce are using fraudulent Social Security cards.

Why All the Fuss?

The wrangling over the term illegal alien goes beyond whether particular words are proper to use.  Underlying the “newspeak” by defenders of illegal aliens is the question of whether the United States will remain a sovereign, independent nation, governed by the rule of law and subject to constitutional constraints. U.S. immigration laws were enacted by Congress.

The Executive Branch has the responsibility to enforce them, not to implement them as the President sees fit.  Those who deny that immigration laws are binding are declaring that there should be inequality under the law, where some groups are not only immune from compliance but should benefit from their offense.

Under attack is the very foundation of this republic as a nation established on the principle of respect for the law, as is the right to self-determination of the American people.  A fundamental principle of sovereignty is that the people of any country have the absolute right to defend their borders and to admit or deny admittance to others according to their discretion and laws. It is not extremist, racist, or anti-immigrant for Americans to expect their national borders to be secure and that those who violate immigration laws are held accountable.