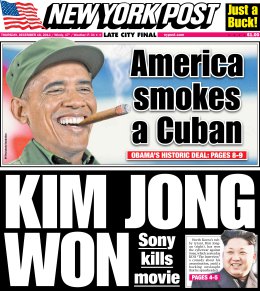 The repressive Cuban regime is not our friend and will not become our friend as long as it continues to believe that it has a mandate to mold the Cuban people into a society of automatons. But it is giving too much stature to the Castro (now run by Raoul) regime to continue to treat it a threat to the U.S. or to its hemispheric neighbors. So, just as it makes little sense to expend U.S. resources to treat the regime as an enemy, so too does it make little sense to treat it as a friend – as president Obama apparently is inclined to do. Establishing diplomatic relations is, in reality, no big deal. We have had ongoing diplomatic and consular relations for many years under the guise of an “interest section” in each other’s capitals.

So what explains his announcement of restored diplomatic relations with the island?

Perhaps he is a clandestine smoker of illegally imported Cuban cigars and would like to legalize his vice. More realistically, his move is another act of defiance to the incoming Republican-majority Congress. It is also in keeping with his courting of Hispanics, most of whom are other than of Cuban origin.

But, why is the import of Cuban cigars illegal? That is the question that appeared to be totally overlooked in media accounts of the president’s statement. News reports noted that president Obama cannot normalize trade relations because of the trade embargo codified in U.S. law. Instead, the president can only press Congress to change the law. But media commentary ignored the historic context for the trade sanctions. It goes back to the actions of the new communist regime in nationalizing (seizing) the investments of Americans in Cuba without compensation. If the Castro regime had at minimum made a promise of compensation, the sanctions could have been put on ice, but the feisty regime was intent on burnishing the purity of its image as an anti-capitalist champion. That situation has not changed.

Absent from the announcement of the restoration of diplomatic relations was any suggestion that the Cuban regime has relented on its commitment to its anti-capitalist orthodoxy and preparedness to reopen the issue of the seizures of the property of U.S. citizens.

Also absent from the president’s stated initiative was any mention of a change in U.S. policy towards illegal immigration. Today, under an executive action by President Clinton we have a ‘wet-foot-dry-foot’ policy that sends back to Cuba Cubans who are intercepted at sea coming illegally but allows those to stay who set foot on U.S. soil. That policy allows those ‘dry-footers’ to stay in the country until a year later when they are given refugee status under the Cuban Adjustment Act. President Obama is already using his claimed executive powers to undo immigration law to excess. It would be a minor action for him to undo the questionable action of President Clinton and treat illegal aliens from Cuba the same as illegal aliens from every other country by sending back all illegal migrants regardless of whether they touch U.S. soil. At the same time he could dismantle another legally questionable executive action by President Clinton in setting up a visa lottery for Cubans. There is no legal basis for this lottery and it was promulgated by Clinton under the blackmail threat by Cuban President Fidel Castro of unleashing a new Mariel boatlift to the U.S. absent a guarantee by the United States to continue to take in a minimum number of Cuban immigrants.