You are at:Home»Immigration Issues»Border Security»What the Washington Post Forgot to Report 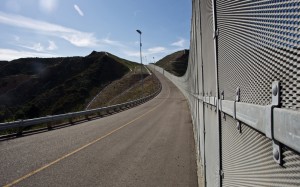 Washington Post reporter Jerry Markon wrote Wednesday that fewer immigrants are entering the U.S. illegally and that as a result it has affected the debate on border security. But the very foundation of his argument – that illegal immigration has decreased– is not even accurate, according to a 2014 Washington Times report “Illegal Immigration Leaps for Third Straight Year.” How did Markon arrive at his flawed calculations?

Markon opens with a story about the difficulties one man experienced when he tried to cross the Mexico-U.S. border illegally. However, that is one individual’s perception and it would be a mistake to apply that experience to every other illegal border crosser since only one in five of them is caught, according to Border Patrol agents; therefore, the majority of crossers did not face the severe obstacles as the one man did.

In fact, the Border Patrol’s figures seem reasonable considering only 670 miles of the 1989-mile southern border actually have a physical barrier between countries. It can’t be too much of a challenge since 63,000 unaccompanied minor children were able to walk across the border last year.

But Markon writes about the difficulty involved in crossing the border to say the young men who historically have made up the majority of this group can no longer seem to find a way into the U.S. – hence the slowdown in illegal population growth.

Any documented reduction in illegal entries and re-entries is due to the administration’s dismantling of our immigration laws in order to falsely portray America’s illegal entry problem. The government has done this by instructing Border Patrol officials not to go after illegal aliens, according to leaked internal training documents from U.S. Customs and Border Protection that Breitbart obtained.

“Border Patrol agents are now receiving guidelines instructing them that the vast majority of illegal immigrants in the U.S. are off limits to federal agents and are substantially immune to detention and deportation.”

It’s ironic that the government is trying to hide the number of illegal border crossers, in order to make entry numbers seem lower since the interior illegal immigrant population has irrefutably grown since the 1990s. The federal government also (conveniently) does not employ a method for tracking visa overstayers, another prevalent type of illegal alien whose whereabouts are unknown and untraced.

The author probably knew many if not all of these facts, hence why he included a disclaimer at the end of the piece, “While the declining number of apprehensions is not conclusive proof that illegal immigration is down, other less publicized research strongly suggests this is the case.” (Unfortunately, Markon failed to publish any interviews with groups who do not agree with that research.)