You are at:Home»Immigration Issues»Did I hear a Bush talk about Chain Migration?

Jeb Bush faced a question about immigration at the Red State Gathering on Saturday. His response was less than predictable. 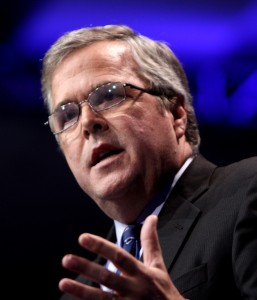 “Legal immigration needs to be reformed as well. Most of our legal immigrants come through a quota system by country and by family petitioning. Most people don’t know this, but it was done in the 1960s and we have what’s called chain migration. We have the broadest definition of family in the world: spouse and minor children, like every country, right? And then adult siblings and adult parents. If we narrowed that to what every other country has, it would be half a million people less. Imagine having half a million people that you picked to come in.”

Mr. Bush touched on a core problem with our immigration system that few others want to talk about: it is based on who you are related to. Americans will be better served if elected officials thoughtfully determine which skills we need (working for less is not a skill) and how many people we can absorb without impacting job prospects of Americans.

To be sure, Mr. Bush did not advocate for a reduction from the nearly one million people we allow to immigrate here legally every year, nor did he suggest altogether replacing the outdated quota system with a merit-based one—but addressing chain migration is a start.

The rest of his immigration platform—including guest workers and amnesty—have a long way to go in terms of serving a broad public interest. He is still a Bush.

Jeb Bush migration population
Previous ArticleThe Debate and the Immigration Debate, or Lack Thereof
Next Article Why is America Recruiting from the World’s Least Developed and Educated Nations?