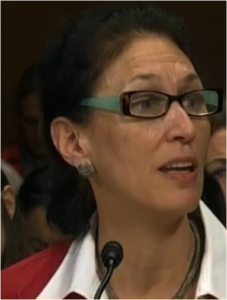 As Chief of the Refugee Affairs Division within the Refugee, Asylum, and International Operations Directorate at U.S. Citizenship and Immigration Services, Barbara Strack oversees arguably the most important part of the refugee resettlement process—ensuring that refugees who present a risk to the safety and security of our country are not admitted. However, while testifying at an Oct. 1 Senate Judiciary Subcommittee on Immigration and the National Interest oversight hearing on the Obama Administration’s planned refugee resettlement surge, Strack revealed that she was unaware that the Boston Marathon bombers were refugees from Islamic extremist stronghold Chechnya.

Focusing on the security implications of the administration’s resettlement program, Subcommittee Chairman Sen. Jeff Sessions (R-Ala.) asked Strack whether the Boston marathon bombers, Dzhokhar and Tamerlan Tsarnaev, came to the U.S. as refugees. “They did not, sir” answered Strack. A puzzled Sen. Sessions then pressed by asking how they did come to the U.S., to which she responded, “I will have to check with my colleagues, but that—they were not refugees.”

Needless to say, the Tsarnaev brothers were brought to the United States by their parents in 2002 as refugees from the volatile Chechnyan region of Russia. Dzhokhar naturalized as a U.S. citizen in 2012 and Tamerlan was denied citizenship around the same time after a prolonged visit to the Dagestan region in Russia, where he became increasingly drawn to radical Islam. The following year, the brothers set off two explosive devices near the finish line of the Boston Marathon, killing three people and injuring more than 130. They subsequently shot and killed an MIT police officer sitting in his car, carjacked a vehicle, and engaged in a shootout with police that lead to the death of Tamerlan. Dzhokhar was eventually apprehended and tried for the terrorist acts and is currently on death row.

While the Tsarnaevs were not the first Islamic extremists to abuse our asylum and refugee system, they provide a recent cautionary tale for our government—one that should be studied extensively and serve as a cause for concern when addressing the current migration crisis. However, as illustrated in the hearing, our leaders and policymakers are oblivious, uninformed, and politically motivated. By continuing to demand that Americans acquiesce to some 200,000 refugees over the next two years, including thousands from Islamic extremist hot spots like Syria, the Obama Administration has shown that the security of the American people is a secondary consideration.

refugees USCIS
Previous Article50 Years of “Thoughtless” Immigration Policy is Enough: It’s Time for Thoughtful Reform
Next Article Washington Post Columnist is Entitled to His Own Opinion, Not His Own Facts