You are at:Home»Immigration Issues»Crime»Washington Post Columnist is Entitled to His Own Opinion, Not His Own Facts 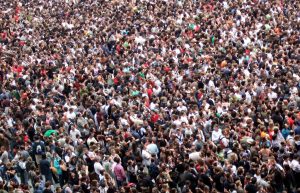 Of course, 2015 isn’t 1850 or 1900, the United States isn’t a big unpopulated continent, and succeeding in our economy today takes more than just a strong back and a strong work ethic. But never mind. He’s entitled to his opinion and the Washington Post is free to publish it.

What Meyerson isn’t entitled to do is to pass off opinion as fact. Without any supporting evidence of cause and effect, Meyerson writes, “Indeed, the growing number of the foreign-born over the past quarter-century goes a long way to explaining the huge drop in crime and violence that the nation has experienced during that time. The number of murders in New York City dropped from 2,245 in 1990 to 328 last year; in Los Angeles County it fell from 1,944 in 1993 to 551 last year, even as the number and share of their foreign-born residents skyrocketed.”

To disprove Meyerson’s cause-and-effect assertion, one has to go way back – like, about three weeks ago – to find government data that suggests precisely the opposite. According to the government’s own crime statistics, while illegal aliens make up about 3.5 percent of the U.S. population, they account for 12 percent of murder sentences, 20 percent of kidnapping sentences, and 16 percent of drug trafficking sentences. And, just this week, the government revealed that one-third of the criminals who will be released from prison as part of the effort to reduce the nation’s prison population are illegal aliens.

There are a lot of things that explain the drop in crime since 1990 that have nothing to do with the growing presence of immigrants. The large baby boom generation was moving beyond their prime crime-committing years and we began locking up more criminals for longer periods of time, meaning they were in jail and not on streets.

Specifically, with regard to New York City, the early 1990s coincided with the election of Mayor Rudy Giuliani who implemented his “broken windows” approach to crime that essentially drained the swamp that incubated more serious types of crime. It was a policy that was emulated by a lot of big city mayors. (Current Mayor Bill DeBlasio has reversed many of those policies and, guess what? Violent crime is once again on the rise in New York City.)

Let’s be clear: The vast majority of immigrants, including illegal aliens, are not violent criminals. But that doesn’t mean we shouldn’t enforce immigration laws. But let’s also be clear about the facts. Illegal immigration does pose a clear threat to public safety and there is no evidence to back up Meyerson’s assertion that mass immigration has caused a reduction in crime.