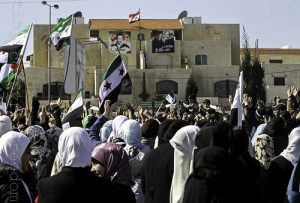 The governors’ statements were made after it was revealed that at least one of the Paris terrorists possessed a Syrian passport that was registered as having passed through Greece, Serbia, and Croatia in October as a refugee. While many of the governors vowed to refuse Syrian refugees completely, others urged the president to halt accepting refugees until background checks could be improved. “The first and foremost responsibility of government is to keep its people safe,” commented Texas Governor Greg Abbott. “We are working on measures to ensure … that Texans will be kept safe from those refugees.” Ohio Governor John Kasich wrote to the president, urging him to stop accepting refugees until “the rigor and depth of background checks are improved,” and to take “no further action in resettling Syrian refugees in Ohio.”

President Obama has given no indication that he would reconsider his pledge to admit at least 10,000 Syrians as refugees, despite warnings from intelligence officials that there are gaps in our ability to screen those seeking admission from that country. Earlier this year, Michael Steinbach, Assistant Director of the FBI testified before the House Committee on Homeland Security, stating, “The concern in Syria is that we don’t have systems in place on the ground to collect information to vet…. You’re talking about a country that is a failed state, that does not have any infrastructure, so to speak. So all of the dataset, the police, the intel services that normally you would go to seek information doesn’t exist.”

While federal law does not give state officials the authority to decide who may enter the United States as a refugee, federal law does require that federal agencies consult and cooperate with the state officials in creating resettlement strategies for refugees. Federal law also requires these agencies to take into account recommendations by the state to the “maximum extent possible” when determining where to place refugees.