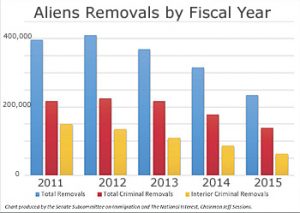 When pressed by Sessions to explain precisely why criminal alien deportations are down over the last four years, Saldaña cited effective enforcement along with a public awareness campaign aimed at prospective aliens. She also argued that her agency was doing all it could to deport criminal aliens. “ICE will continue to do the best job we can, within the bounds of existing law, to accomplish our mission, make strategic use of our resources, and improve efficiency and reporting,” she said. Sessions was not satisfied, noting that her agency’s budget for deportation was increased from $2.6 billion in 2011 to $3.4 billion this year, and that the government even returned part of that allotment.