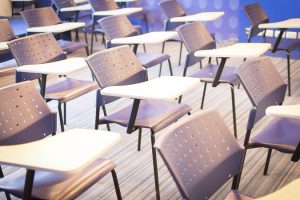 Last month, more than 1,100 public school students in Oklahoma City walked out of their high schools to protest looming budget cuts of $30 million.

“I had an opportunity with golf, you know, I could have maybe gotten a scholarship, who knows, and they cut golf so there went that opportunity,” said protest organizer Cassidy Coffey, a straight-A junior at U. S Grant High School. “My future’s being affected, all of their futures are being affected, as well,” she added, pointing to her fellow protestors. Getting rid of the tennis team also ruined another student’s ability to potentially garner a scholarship.

To help alleviate what officials refer to as a “catastrophic” budget, U. S. Grant laid off 20 teachers. “By firing our teachers, it’s making our class sizes larger and it’s disrupting the learning environment,” said Adriana Martinez, a junior at U. S. Grant.

The school’s principal, Greg Frederick, admits that some classes are jammed with 40 bodies. In all, 208 teachers and 92 administrators will receive pink slips in Oklahoma City this summer.

It turns out that illegal immigration is a zero-sum game where one party gets the resources and the other is left with an empty bag. One out of every three students in the city’s school district is enrolled in the English Language Learners (ELL) program, representing an annual cost of $125 million—more than four times the current budget shortfall.

As other programs cut teachers, the district is putting out the call for new ELL instructors, though it has a hard time finding them. In fact, according to federal officials, the state will need 400 new ELL teachers by 2018 to adequately serve this growing population, which would cost $18 million. Oklahoma taxpayers already spend $395 million on failing ELL programs that serve almost 45,000 pupils.

In the past two years, moreover, Oklahoma has received 786 Unaccompanied Alien Minors, who crossed the border illegally from Mexico, Guatemala, Honduras and El Salvador. Their education will cost the state another $7 million a year.

Indifferent to the impassioned pleas from students, just hours after the walkout, the acting schools superintendent called for $7 million in additional budget cuts.

As illegal immigrants get a free ride, American citizens like Cassidy Coffey, who has the gumption to fight back, are suffering. “We’re the future,” she said, predicting a bleak outcome. “How are we going to thrive as, you know, humans in this society if we’re not taught how to do so?”