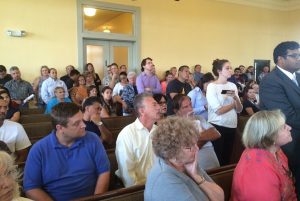 On Monday, Dimmit County, Texas, Commissioners unanimously rejected a bid by Stratton Oilfield Systems for a detention center that would have housed unlawful border crossers in “hotel- like” conditions at a preexisting oil field work camp. More than 100 people attended the Commissioners’ meeting to express their opposition. The public comment portion of the meeting was set to last hours as individuals filled up more than six pages of sign-in sheets to voice their opinions.

After only forty minutes, County Judge Francisco Ponce had heard enough and ended the public comment period to convene a vote. It took commissioners less than five seconds to vote no. Explaining his decision Ponce stated, “In my community if my constituents say we don’t want it, well I’m going to hear them.”

The detention center would have accommodated illegal aliens with a spacious two-bedroom studio that included a full living room, kitchenette, and full bathroom. In addition to the luxurious living standards, Stratton Oilfield Systems President Dan Stratton, explained the facility would not have fences, but be patrolled by armed guards. That statement was not taken well by community members who balked at the potential security concerns.

Security concerns aside, many people pointed out how one-sided the deal was. One resident pointed out the taxpayer funded housing would put illegal aliens, “in a facility that’s better than where I live.” Prior to the meeting, initial news of the deluxe lodgings sparked a huge backlash as many individuals took to social media to voice their outrage, commenting on the duplicity of housing illegal aliens in luxury conditions while countless U.S. veterans remain homeless.

The decision by Dimmit County to reject the detention center exemplifies how elected officials should listen to their constituents. It seems the public is starting to add up the generous taxpayer funded benefits given to illegal aliens and wonder why that money shouldn’t be used to help their own communities. Perhaps, our representatives are finally learning the ever important phrase, “you should never bite the hand that feeds you.”