You are at:Home»Immigration Issues»Border Security»With Pen and Phone Gone, Nothing Left but Mouth 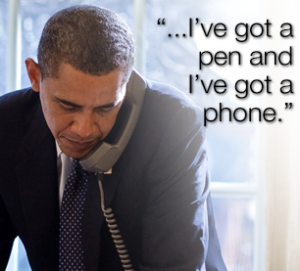 When the Supreme Court split 4-4 in US v. Texas on June 23, President Obama was dealt a setback. Gone was his claim to expansive – indeed limitless – power to give aliens benefits regardless of the law.  The injunction remains as the trial on the merits will now resume in a district court in Brownsville, Texas, where the Judge Andrew Hanen will continue his battle with refractory and obstructionist attorneys from the Department of Justice.

President Obama’s pen and phone were used to create new wholesale classifications of aliens who not only would never fear deportation, but would get jobs and benefits. The Supreme Court grabbed his Mont Blanc and iPhone, and left him with his bullhorn.

Stripped of Pen and Phone, Obama’s putting his mouth into overdrive. Yesterday we were treated with yet another boring lecture on how awful Americans are for wanting immigration controlled and borders enforced.

Speaking in Canada, Obama lectured: “We’ve had times throughout our history where anti-immigration sentiment is exploited by demagogues,” he said at a presser with foreign leaders outside the U.S. “America is a nation of immigrants. That’s our strength. Unless you are a Native American, somebody, somewhere in your past showed up from someplace else, and they didn’t always have papers.”

This sort of condescension – even while overseas — is now commonplace from Obama.  Blunt translation to the American people: “Sit down and be quiet.”

This is offensive. What kind of leader regularly demeans, attacks and criticizes the people he is supposed to represent in front of a foreign audience? Only a powerless one, reduced to lecturing out of frustration. Not since Jimmy Carter’s late-term lectures have we heard this sort of arrogance that demeans the honest and heart-felt feelings of the people.

If the president cannot bring himself to enforce the laws Congress and previous presidents have passed, then why did he take the oath in the first place? Sacrificing one’s moral and legal duty as chief executive in favor of degrading lectures, smears and excuses is no way to carry out the most basic duties of the office.