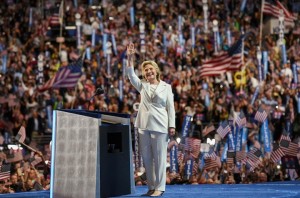 Many people are skeptical of Donald Trump’s immigration rhetoric, but he has forced a much-needed debate on the issue. Leaders and candidates from both parties now must present their positions on immigration for voters to consider.

In her speech accepting the Democratic nomination for president, Hillary Clinton promised to deliver immigration policies more lax than the Obama administration. “I believe that when we have millions of hardworking immigrants contributing to our economy, it would be self-defeating and inhumane to kick them out,” she said. “Comprehensive immigration reform will grow our economy and keep families together.”

Clinton clarified on Sunday that she is willing to deport criminal illegal aliens. “My priorities are [to]deport criminals, violent criminals as fast as we can. Deport anybody that we think even has a possible link to terrorism.” Still, she doubled down on her call for amnesty, insisting it will be “good for the economy.”

Though it’s encouraging to see both major candidates support a crackdown on criminal illegal immigration, the former Secretary of State’s immigration agenda is premised on a falsehood. The argument that illegal immigration improves the American economy is absurd, because stubborn facts show that it’s actually a constant drain.

The Heritage Foundation estimates that families with an illegal head of household receive approximately $14,000 more in benefits than they pay in taxes. Additionally, the children of illegal immigrants require just over $12,100 to educate, with the cost falling entirely on the backs of taxpayers. The bill totals $43.9 billion for 3.6 million pupils. FAIR estimates that the cumulative cost of illegal immigration totals $113 billion every year.

But the legal immigration system is broken as well.  On the other side of the ledger, dysfunctional H-1B system allows U.S. companies to lay off citizens in favor of cheap foreign workers. Major corporations like Intel and Disney fired thousands of Americans over the past few years to take advantage of this program. Giving good paying American jobs to foreign workers is hardly a policy we should tout.

If the federal government continues incentivizing illegal immigration with non-existent enforcement measures and access to social benefits, more Americans will end up looking for work in an already overcrowded job market. If the next president escalates the damaging immigration policies of the current administration, the results will devastate an already strained United States economy.

Spencer joined the Federation for American Immigration Reform (FAIR) in 2015. He conducts research, and writes content for FAIR’s publications and website. He brings previous experience in state politics, gubernatorial and district campaigns, and D.C. political non-profits. Spencer holds a B.A. in Government from the University of Texas at Austin.