You are at:Home»Jobs & Economy»New FAIR Radio Ad: Immigration Reform Does Not Mean Amnesty 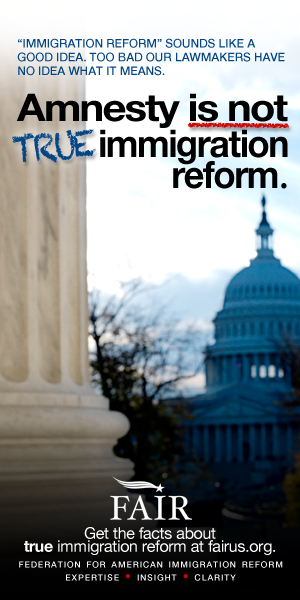 President Obama, Democrats, and amnesty supporters often use the term “immigration reform,” but their idea of reform is rewarding lawbreakers with legal status and a right to work in the U.S.

This approach is not reform. It’s amnesty. Real reform would fix our immigration system to serve Americans’ interests. Amnesty rewards illegal aliens and encourages more illegal immigration in the future.

Virtually everyone agrees that the immigration system we have now isn’t working. Unfortunately, the meaning of the term “immigration reform” has been hijacked by those who want amnesty for illegal aliens and even more expansive immigration, while doing nothing to rectify what is wrong with the current policy. FAIR’s ad campaign is designed to remind people that there are viable alternatives to mass amnesty, or the status quo.

Speaker John Boehner has committed to not negotiating with the Senate on their amnesty bill. That’s a good thing. Now, he and House leaders must commit to reform that protects American jobs, scarce government resources, and upholds the rule of law.