On the 11th Day of Amnesty, the Senate passed… 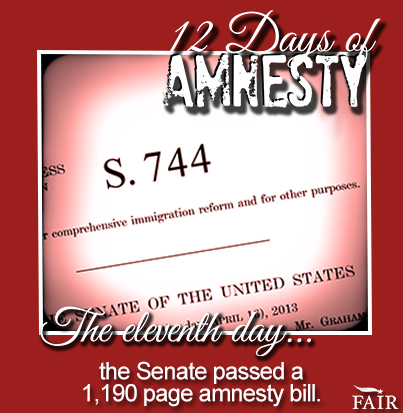 It’s incredible that such a behemoth of a bill could do so little to improve the lives of Americans. However, S. 744, the Senate-passed amnesty bill, devotes 1,190 pages to outlining how to forgive illegal immigration and invite more foreign workers.

Special interests ranging from the U.S. Chamber of Commerce and AFL-CIO, to the big agriculture and illegal alien lobbyists, spent much of last spring pow-wowing with the Senate Gang of Eight. All were trying to cram in their sweeteners and exemptions. No wonder the bill ended up reaching nearly 1,200 pages!

Long bills don’t necessarily mean bad legislation, but when the most important stakeholders – the American people – are left out of the backroom deal those 1,000 plus pages are filled with provisions benefiting a few self-interested parties rather than the whole.

If recent news surrounding Obama’s healthcare rollout serves one lesson it’s that we should, in fact, know what’s in a bill and it’s implications before we adopt massive changes. Now the administration is going back and taking questionably legal actions to “fix” Obamacare. Who’s to say the same wouldn’t happen when an amnesty begins? How many companies would be exempted from the Senate bill’s already flimsy E-Verify requirements? Would protections for U.S. workers be eroded even further?

There are a lot of unanswered questions about these 1,190 pages. And unlike the healthcare bill, we shouldn’t let Congress pass it just so we can find out what’s in it.