You are at:Home»Featured»The truth about who actually supports and opposes Obama’s handling of immigration 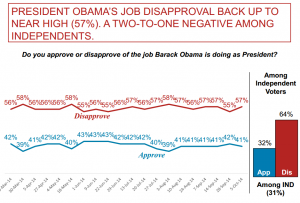 When someone uses the term “immigration reform advocate,” the mental image of a Hispanic Millennial may be the first to come to mind.

Contrastingly, at the mention of “securing the border,” one may think of a middle-aged suburban and rural dweller.

New data from a Paragon Insights poll indicated that both of those perceptions are partially incorrect. The early October survey looked into how Americans feel about President Obama’s handling of immigration. Surveyors then broke down their findings into geographical, sociological and political categories to provide a more thorough analysis of how important true immigration reform is among these different groupings.

Fifty-eight percent of likely voters disapproved of how Barack Obama has handled the issue of immigration. Only 32 percent of the country approved of his approach while 9 percent stated “don’t know/no opinion.” The below categorizations were all in response to whether they do or not approve of Obama’s management of national immigration policies.

If the Obama administration grants amnesty to millions of illegal immigrants later this year, millions more of low- and middle-class workers may lose jobs as a result of large employers being able to hire immigrant workers at lower compensation rates. Consequently, we may then see the president’s ratings plunge as those who supported the president realize it was his agenda that caused their newfound unemployment.