You are at:Home»Politics»Everything’s Bigger in Texas – But Population Growth Doesn’t Have to Be 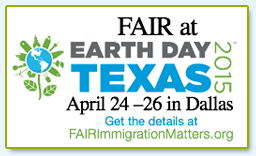 The hard fact is that while the population is booming here and round the world, the resource base that sustains the economy is rapidly dwindling. It is not just a problem in faraway lands, it is an urgent, indeed, a critical problem here at home right now.

FAIR challenged Earth Day 2015 attendees to consider the impact population growth has on the environment, from increased resource consumption to development of natural spaces.  Members of the FAIR team talked to Texans about the leading role immigration plays in our national population growth and ways to take control of our national destiny, including stopping the inflows of unregulated illegal immigration and reducing legal immigration.

FAIR launched an environmentally focused website, FAIRImmigrationMatters.com, in honor of Earth Day Texas illustrating how immigration-driven population growth will affect Texas. FAIR members are encouraged to visit the site now and in the future when it is updated with national data and impacts.