You are at:Home»Jobs & Economy»New Documentary Examines the Abuse of Legal Immigrant Laborers: Southern Poverty Law Center Unwittingly Sides With FAIR on the Issue 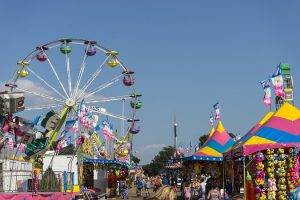 When FAIR and the Southern Poverty Law Center agree on something, then things are really out of whack.

The workers, who traverse Maryland and Virginia setting up, operating and tearing down carnivals, hail from Tlapacoyan, Mexico, a town of 60,000 whose mayor is a former carnival worker now in the employ of Judkins. Instead of picking crops for four dollars a day at home, they opt to come to the United States for eight months to work for $360 a week, sometimes for 20 hours a day with no overtime pay.

Carnivals generate $500 million a year, but clearly, even under the legal visa program, workers suffer. This difficult, potentially dangerous work sometimes requires 20 hour days: it takes a special discipline to break down a Ferris wheel at 4:00 am after working a fair all day and packing up other pieces of heavy equipment.

In addition to paltry pay, these workers live in squalor. There is no running water in their trailer park and often no electricity. If they get hurt, the boss discourages them from seeking medical attention and hands out bribes to keep them from suing.

Judkins formed a sham union to provide cover, but the organization bargained for lower wages. Several non-profits, including the Southern Poverty Law Center, are fighting to improve the workers’ plight and the Department of Labor is investigating.

It is tragic that these legal workers are treated like slaves and have limited recourse. They are bound to their employer and have limited leverage over the situation. Despite a raft of rules associated with the visas, government oversight is minimal, so the workers have no voice.

Judkins claims that he issues 81 percent of all visas used by carnival workers, around 3,500 of the 66,000 H-2B visas approved each year. Other industries that use the program include hotels, logging companies, landscaping firms and the seafood industry.

It would be far easier for a carnival operator to hire illegal workers rather than jump through federal government hoops, but these workers would make less and be even more pliable than the visa holders.

Though they clearly advocate for reform, the filmmakers adopt a relatively even-handed approach. They could have easily demonized either side in this story, but avoided the simple stereotypes of greedy, penny-pinching carnival owners and Mexican workers taking jobs from Americans.

Toward the end, a twist develops when the workers admit that they stole tickets to sell them to the public at a discount, claiming that they need this money to supplement their meager wages.

But despite the low pay and difficult labor, there are more people in Tlapacoyan who want to work for Judkins than there are jobs to fill. Some of his workers built houses and can easily support their families back home. One worker is shown wiring at least $800 to his wife. After the season ends, the filmmakers ask some of the laborers if they want to return to the United States the following year. They all do.

Judkins, who dropped out of college to join the circus, claims that he is on a crusade to save the American carnival. He complains about his Spartan lifestyle and pleads poverty, as does the workers’ employer, Peter Joseph, president at Jolly Shows.

But the laborers tell a different story. They complain that Joseph is always putting money in the bank but never withdraws any funds needed to meet payroll. The men are paid in cash from the proceeds of the carnival, so if it rains or things are slow, payday comes a little later than expected.

Perhaps the most disturbing aspect of the entire film is the contempt shown toward American workers, who allegedly have lost their work ethic. Of course, it is difficult to find Americans willing to toil under such grueling conditions for such low pay. The Mexican workers are lauded for their dependability and work ethic. Yet if wages, living conditions and safety all improved, American workers just might be tempted.

“Most Americans don’t want to give up living in one place, having a house to travel nine months a year,” Judkins told the Oklahoman in 2008. “Not everybody wants to drop out of college and run away to the circus like I did.”

The other alarming aspect of the film is that the Walmartization of the United States – where low prices become the penultimate goal – is degrading working conditions and dragging down wages. Anyone who attends a carnival is complicit in the system and it is sad that Mexico is in such a troubled economic state that these workers view this line of work as an opportunity, allowing employers to abuse their labor in exchange for what sometimes shakes out to less than minimum wage.

To cut costs, Jolly Shows maintains no health insurance for its workers, one of whom claims that he almost lost his hand after a work injury because Joseph at Jolly Shows discouraged him from going to the hospital for several days. The laborers are supposed to be covered under the Affordable Care Act, but the filmmakers never explore this dynamic in depth.

Ultimately, the film reveals how even legal migrant workers who play by the rules and take pride in their work suffer under the H-2B visa system. Imagine how much worse conditions are for illegal workers in the carnival industry. It makes no difference if immigrant laborers take the legal road or ignore the rules: hardship is inevitable – except for the employers.